Waterfalls are downright awesome. That is unless you’re going over one! But from the ground, the sheer power of millions of gallons of water blasting over a chunk of earth is something to behold. But once you get a drone involved, you get a visual experience that is second to none. That is why waterfalls are such a popular display for drone pilots to capture. They rarely disappoint!

Enjoy this collection of some of the best drone waterfall shots from social media. These are excellent images from very talented drone pilots indeed! Feel free to comment or send us your best waterfall captures to be featured in future posts.

Check out this shot of the Seljalandsfoss waterfall in Iceland. What a shot! It was captured by @Pescantini who classifies himself as a creative photographer who shoots with camera, Polaroids and drones. The rising mountains behind this waterfall really make this one of the best drone waterfall shots online today.

“It’s always more fun when you’re FLYING WITH FEMALES” proclaims @OCDroneGirl on Instagram. With shots like this, it’s hard to disagree. This waterfall from Orange County (assuming) is one beautiful capture and makes most anyone want to jump in that crystal blue water. This is a screen shot of a documentary called Free Will – a great shot of a character walking a tightrope. Very cool! Just don’t fall! Shot by Brazilian filmmaker @pedronebrasil.

5. Churun-meru and Cortina Falls in Venezuala

Wow. The Churun-meru (Dragon) and Cortina Falls in Venezuela. This is one, awesome natural wonder and it’s all a part of the Angel Falls in Venezuela. The image was caught by a talented group of Russian photographers who call themselves Air Pano – specializing in most things, well, air panoramas.

Thommankuthu is a very scenic waterfall near Thodupuzha, in the southern state of Kerala, India. We’ve learned it’s named after the great hunter, Mr. Thommachen Kuruvinakunnel, who let the world know of this beautiful waterfall in the jungle in the late 1920s. This video was captured by the Quad Cam Bros.

7. The chilly waters of Salt Creek Falls in Oakridge, Oregon

Salt Creek Falls is a cascade and plunge waterfall on Salt Creek, a tributary of the Middle Fork Willamette River, that plunges into a gaping canyon near Willamette Pass in the Willamette National Forest, near Oakridge, Oregon. This frigid drone water snap from @xavierbrasseur captures the beauty of the Pacific Northwest. He says: “Gods perspective is so much higher and infinitely greater than mans!”.

Nothing like some free air conditioning compliments of Mitchell Falls in Kimberely in Western Australia. It’s a very beautiful four-tiered waterfall that embodies the beauty and rugged character of the Australian Outback in the remote Kimberley Region of Western Australia. This great shot was captured by @clip_media_motion. Great stuff.

Iceland has some of the most beautiful waterfalls in the world. Take a look at this snap from @CreativeDogMedia of the Gullfoss waterfall which is about 80 miles from Reykjavik, Iceland. They say: “Make this trip if you’re ever in this gorgeous country!”. We say…we will!

You can’t have a gallery of waterfalls without including the great Niagara Falls! Here is a great shot from behind the fall from @khertz30. The sheer power of the falls can make anyone a bit uneasy – but it’s beauty is evident from the sky (or up close!).

Talk about the great expanse! This amazing shot of the Kaieteur Falls in Guyana was caught by @dg_aerials. The waterfall is 741 feet (226 meters) tall. That means it’s quadruple the size of Niagara Falls and twice as tall as the Victoria Falls. Now THAT is massive.

13. The Sasa Waterfall in Fiji

Talk about lush! This is the Sasa Waterfall in Fiji captured by @TahoeMatt. This was a great capture not only catching the falls, but the framing of all the foliage in and around area. With that many plants and trees, the water’s gotta go somewhere. TahoeMatt found it. Beautiful. 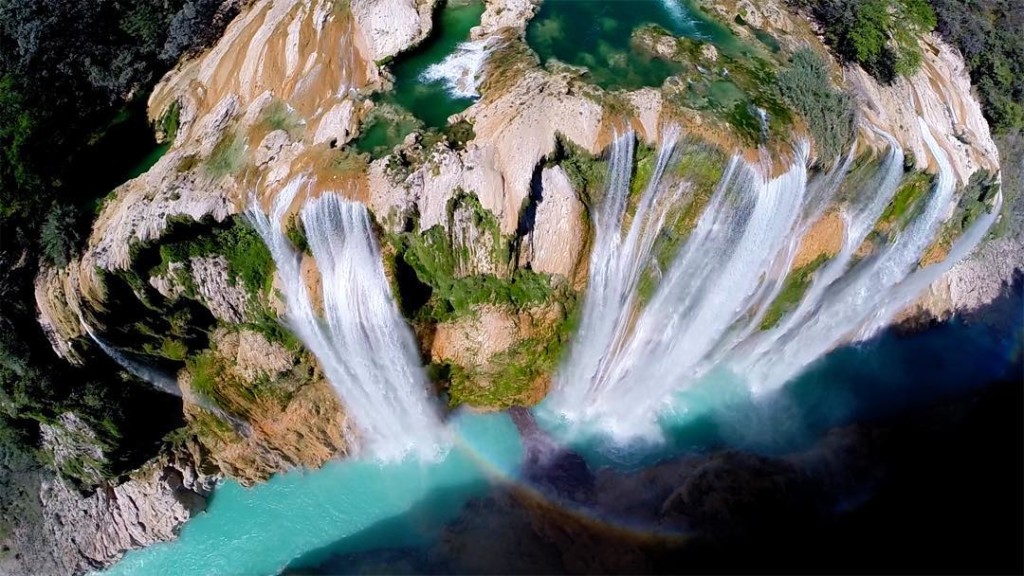 It’s always a bonus when you catch a great waterfall shot – but a several at once? And a rainbow to boot!? This amazing shot was caught by @PostAndFly. It’s the Tamul waterfall and it’s the biggest one in San Luis Potosi, Mexico. It’s clear to see why. Simply magical. Simply magnificent.