Unmanned aerial vehicles or drones are giving hobbyists endless abilities to surveillance the city. Currently, there are very few limitations on the usage of drones or the modifications. Most recently drone owners have gotten creative and modified them to carry a firearm.  There are no federal laws that make drone guns illegal. 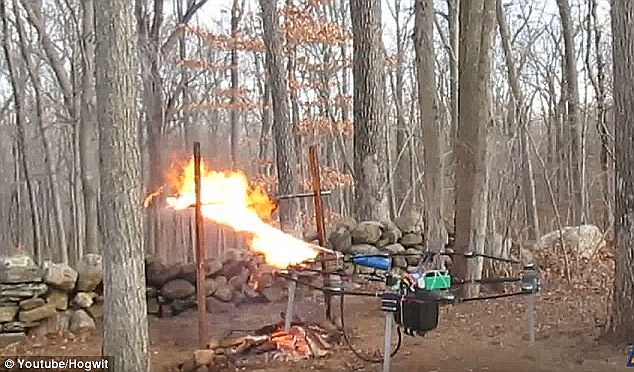 A teen in Connecticut was flagged by the Federal Aviation Administration this summer for posting a video that showed a drone rigged with a semiautomatic handgun. Austin Haughwout posted the video of a homemade drone that had a gun and a flamethrower. The video very quickly went viral throughout the drone community. The FAA is asking the Connecticut court for a subpoena to look more into the drone that the young man had created. In Vermont, Oregon, North Carolina, Nevada and Wisconsin, there are drone legislation that contain limits on armed drones. The legal analysts at the FAA say that there are no regulations that prevent an American from putting a gun on a drone. Many were initially confused as there’s a statute that bans the “dropping of objects” from aircrafts.

Although Haughtwout was arrested for assaulting two officers, he was able to post bail which was $12,500. Authorities said that the arrested did not have anything to do with the FAA’s initial investigation. The teen’s father told WFSB-TV that a Central Connecticut State University professor helped his son create the device. The CCSU professor denies assisting the teen. This isn’t Haughwout first time being in the news. He was attacked by a woman for flying his drone over a local beach.

Democratic state Rep. Jon Hoadley of Kalamazoo is actively fighting to make owning weaponized unmanned aerial vehicles illegal. There are many Democrats and Republicans that are sponsors of this bill. The state rep. has voiced that he did not want to wait for something terrible to happen before laws were created to restrict these modifications. Michigan has already passed laws preventing people from hunting game using a drone.

As far of the FAA being interested in Haughwout, it is unlikely that they will get a subpoena. Haughwout’s lawyer, Mario Cerame, has been notified of the FAA’s interest. He believed that the FAA is trying to get his client based on a technicality. Lawmakers in other states will more than likely create laws to restrict drones as they are continuing in popularity. Although drones are not dangerous, armed drones can become problematic in the wrong hands. There may in the future be an age restriction to build or own them across America.