P.J. Cook is a veteran pilot and has seen his fair share of unbelievable sights from the air. He wrote about the FAA’s regulations for drones offering an interesting perspective given his background. Heck, he’s seen them from the ground as well. Such was the case recently when he watched a battle in the skies from the screen of his device. ‘Hawk collides with drone’ is not a headline he anticipated for the day he went out to fly his DJI Inspire 1 recently. What followed was downright shocking. The hawk not only battled the drone, it won in a big way. 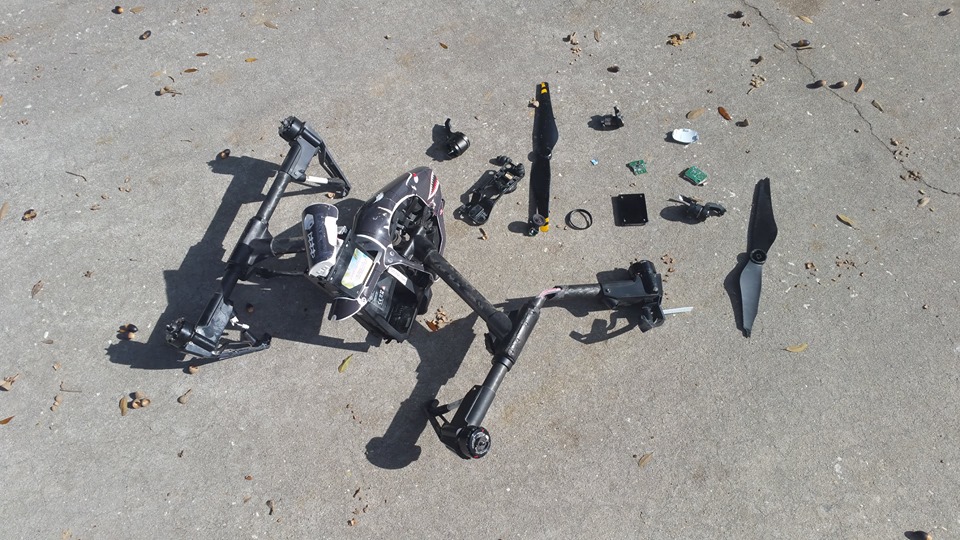 P.J. shared some of the ‘aftermath’ photos of the mid-air exchange. And as you can see, the bulky, strong Inspire had it’s work cut out for itself, and after falling – was no match for the concrete below.

Score: HAWK 1, Drone 0 This is what 400 ft in flight being attacked by a Hawk looks like when my drone impacted concrete. She was an awesome drone and will be missed! No, I didn’t recover the microSD card…only fragments of it. RIP! A VERY expensive bird strike indeed!

Our own Copter Bill chimed in with a comment:

“This is why i am totally against flying out of los (line of sight). If this happens a mile or two away it can have catastrophic results. It can in los as well but at least you can see the bird coming and try to avoid. What uav was it? Damn nevermind, i see it was an Inspire.”

To which P.J. replied:

“I was in LOS brother! It was only a few hundred yrs away. I was turning back and looked down at the iPad for a second to ensure the subject was in frame and saw the crazy death spiral to the ground…no avoiding a fast Hawk making a run in from behind. I have dodged dozens of strikes like this and finally got nailed.”

In the end, it was the end of P.J.’s treasured Inspire 1 – one that wasn’t insured, we’ve learned.

Just a warning to drone users out there, they’re not called birds of prey for nothing. Fly safely!