The political Super Bowl is upon us. Cleveland will be front and center when 50,000 GOP conventioneers and visitors arrive for the massive GOP convention. Security will be tight as Donald Trump steps into the coronation as the Republican’s nominee for president. The headline for drone pilots, however? No drones allowed.

There will be road closures. In a release from the city, 29 federal, state and city agencies listed the expected road closures and traffic restrictions. Access to the Rock and Roll Hall of Fame, Voinovich Park, and Great Lakes Science Center between 12:01 am Sunday July 17 and 1 am Monday July 18 will be limited, for instance, and Burke Lakefront Airport, located downtown along the shore of Lake Erie, will only be open to private aircraft.

But what about your DRONE? Better leave it at home, Cleveland says. 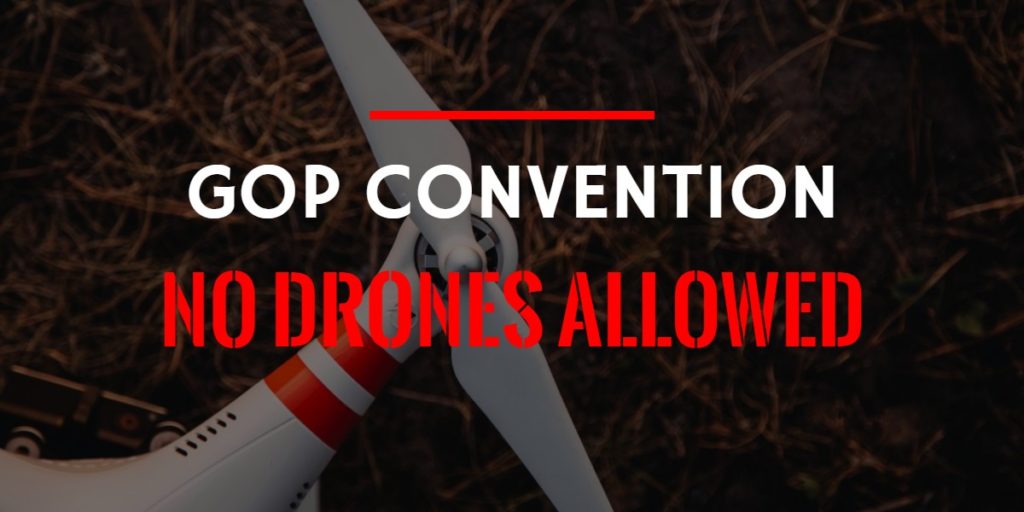 According to the release, the entire CITY of Cleveland…all 82.47 square miles of land and water will be a ‘No Drone Zone’:

The US Secret Service says the no drone rule is simply part of its usual security planning.

Authorities are becoming more worried about drones that can be used by terrorists and criminals; some can be equipped with guns or chemical weapons. Last year a 2.8 pound drone on a recreational flight accidentally crashed on the White House lawn. The police use of a robot to kill the Dallas sniper last week has called into question the ability to use remote devices to inflict harm. And, of course, there’s the controversial use of military drones deployed by the Obama administration to kill terrorists overseas.

The rapidly falling cost of drones have made them accessible to those who want to use them as weapons or carriers of contraband such as drugs. The latest drone model from China’s Xiaomi sells for just $380.

Still, the US sees drones as a potential new industry that could generate more than $82 billion for the US economy and create more than 100,000 new jobs over the next 10 years. The FAA has proposed new commercial drone rules, which go into effect on Aug. 29.

Among other things, drone pilots must be at least 16 years old and pass a FAA-approved test or have a pilot’s license and complete an FAA training course. Pilots must be vetted by the Transportation Security Administration and be able to see their drone while it’s in flight. There aren’t any specific rules on privacy.

Drones were a source of controversy during the last Republican convention, held in 2012 in Tampa. Then, they were seen as a security device, not a risk.

City police wanted a couple surveillance cameras mounted on drones, but locals objected. “There were significant privacy concerns associated with the use of drones over America’s back yards,” John Dingfelder, a former Tampa city councilman, told the Tampa Bay Times.

Police eventually dropped the idea because of costs, the newspaper said.

“Well, obviously, we are in a much different environment in 2015 than 2012,” says Mainor of the Secret Service.