You hit the jackpot. You got a drone for Christmas. Maybe you were super lucky like the kid who got the Mavic Pro (well done, Mom!). But regardless, if you got a drone you probably have a smile on your face right this moment. Or, maybe that smile is gone because your drone is already missing, crashed, dead or just plain destroyed. First timer? Don’t feel bad. It will likely happen to thousands across the globe this holiday. Newbies on their first flight and it quickly becomes their last. Watch for falling drones. It’s pure sadness.

In our neighborhood, it happened almost immediately. If you use the neighborhood app Nextdoor, you know that people post about almost anything in and around your neighborhood. This is what we received on our notifications the other day.

Jerry had found a drone.

At first there was radio silence. I was really dying to know what kind of drone it was. Was it a Mavic? was it a Yuneec, Bebop, Parrot? I didn’t have to wait too long to get the answer.

Gina – being the good Mother that she is – was on the hunt for her son’s brand new Sky Viper. Poor little guy let it get away from him and now it’s in Jerry’s hands. Would Jerry be mad? Did he already throw it away or give it away? Would Gina’s son be devastated? I really wanted to know how this ended.

And thanks to the neighborly power of social media, we had our resolution: 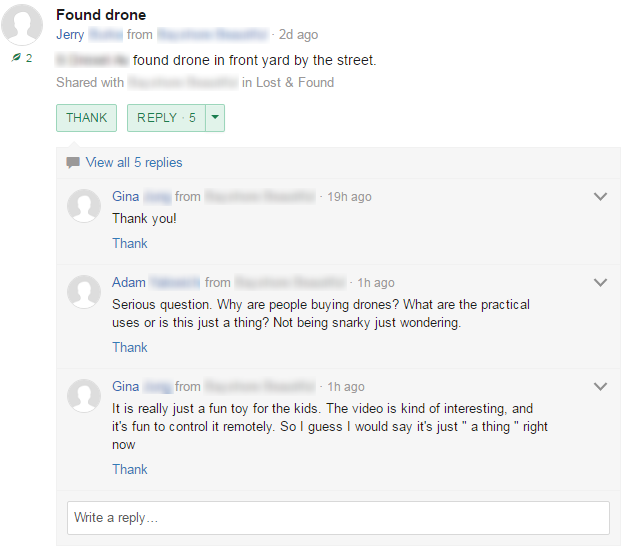 The dialogue between Adam and Gina is a bit intriguing. It’s interesting to see how non-drone users view drones. That’s a whole separate blog post on the debate over drones being a ‘thing’ or a real game-changer. We all know it’s the latter based on the ridiculous explosion of drone companies pumping out newer, higher-tech devices that get smaller each round packed with more technology.

But no doubt this example of a ‘boy loses his drone’ story is only one in thousands around the country I can imagine. It’s fun to see it play out and definitely have a happy ending.

Remember, always fly safe! Have you had any run-ins with some drones falling from the holiday skies? We want to hear about them. Send them our way or post in the comments. Happy New Year!