To say that GoPro has had a tough 2016 would be an understatement. Sales are down, its share price has plummeted, and now the product the company hoped would help turn things around, the GoPro Karma drone, has fallen flat on its face. Literally.

While competitor DJI has been busy dealing with a delay that gave GoPro a headstart in festive sales, the Karma has been going down a bit too well. In fact, it’s been falling out of the sky for no apparent reason. Not an ideal trait for any consumer drone, we’re sure you’ll agree.

Because of this fault, GoPro has announced the recall of all Karma drones – somewhere around 2,500 have been dispatched to customers since October 23rd. The company hasn’t yet admitted what the problem is with the Karma drones, but the videos emerging online appear to show a sudden loss of power as if the battery is disconnecting at random. Customers are being asked to return their Karma drone back to GoPro in exchange for a full refund. Exchanges are not being offered at this point.

“Safety is our top priority,” said GoPro Founder and CEO Nicholas Woodman. “A very small number of Karma owners have reported incidents of power failure during operation. We have moved quickly to recall all units of Karma and provide a full refund while we investigate the issue. We are working in close coordination with both the U.S. Consumer Product Safety Commission and Federal Aviation Administration. We are very sorry to have inconvenienced our customers and we are taking every step to make the return and refund process as easy as possible.”

Timing is everything with GoPro

Maybe we’re just cynical. But surely it’s no coincidence that GoPro announced the recall on the same day as the American presidential election: November 8th. It’s as good a day for burying bad news as any, and we can’t help but wonder whether the news was suppressed as part of a damage limitation strategy. After all, videos such as the one above began to surface more than a week before the recall was started.

While this might seem like a clever piece of timing from GoPro, in reality the company may have knowingly been putting pilots and the public at risk for longer than was necessary.

What now for GoPro

If we zoom out our focus from the Karma, the financials aren’t looking good for GoPro. Despite the launch of new action cameras and the Karma drone in September, sales are down from the same point last year and the company’s share price is falling.

To participate in the recall, visit GoPro’s web page at www.gopro.com/2016karmareturn

The Karma has got off to a pretty rotten start, and it’s difficult to see where it goes from here. Consumer confidence is going to be lower than low, and in an industry where pilots tend to follow brands known for reliability, gaining a foothold with this first foray into the market is going to be insanely difficult after the recall.

GoPro Karma Recall – a look on the bright side

There are three reasons why GoPro and its customers can hold on to some positivity for 2017. Prices may drop sooner than anticipated.

For starters, the whole mess around this recall might force the company to drop prices faster than anyone would have anticipated. If sales get off to a slow start – which they probably will now that the Karma has been undermined by reliability issues and the Mavic Pro is on the way – a lower price for a complete Karma bundle could attract a wave of new users to the market. How much room GoPro has left for maneuver in that department remains to be seen. 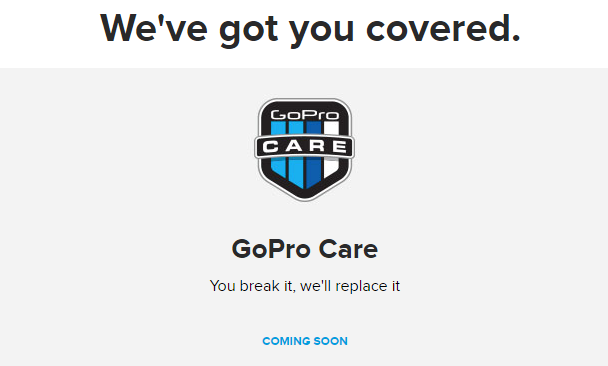 Second, instead of lowering prices across the board, perhaps GoPro will announce some changes to its Care plan. We don’t know much about it yet, but as you can see from the image above it’s going to be pretty substantial. Even if a drone with reliability issues comes with a care package then fine; at least if it does break pilots will be covered.

Finally, not to be underestimated is the sense that things can’t get any worse for GoPro. The cat’s out the bag with news of the Karma recall; they aren’t going to sell any more until they’ve fixed the problem. Maybe this is a blessing. Instead of realizing a few months down the line, the company has managed to discover the issue before too many sales made a recall truly embarrassing. A second release with mistakes firmly put in the past and, who knows, maybe even a few positive reviews, could get the Karma back up to speed again.