Just when you thought the hype surrounding drone racing – the self-proclaimed ‘sport of the future’ – couldn’t get any more intense. It now turns out that an offshoot of the sport is readying itself to steal the headlines from the likes of DRL and the International Drone Racing Association. This is Freedom Class, and it’s going to be drone racing with a big difference. 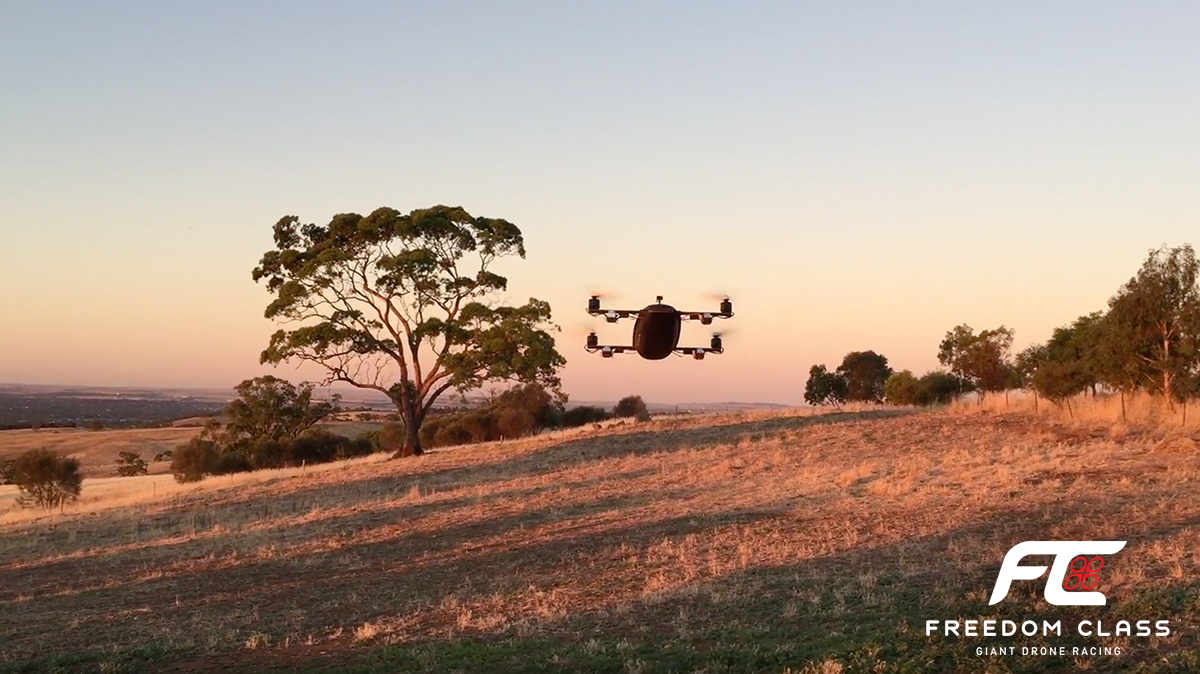 That difference is size. These racing drones are similar to those we have seen in every way apart from scale. They are around 40 times heavier than the average racing drone and measure close to 4 ft across. The team behind Freedom Class has been working on its first working prototype for over a year, and last month released footage of the beast in testing:

Pretty impressive, we’re sure you’ll agree. This is the first version of the Freedom Class to fly, and there’s more developments to come in 2017.

The team behind Freedom Class

Freedom Class Giant Drone Racing is based in Australia and headed up by Chris Ballard, one of the first people to be involved in drone racing down under.

Also part of the team is Dr. Leonard Hall, a specialist working with the Australian & US militaries on drone technology and lead programmer of the world’s most popular drone firmware; Grantley Reed who is spearheading safety, licensing and regulations; Dave Heavyside on media and communications; Paul New, who provides expertise on governance, business structure and strategic management and Roger Ferrer, who has 15+ years experience in motorsport event management, from MotoGP to the Renault World Series and the Barcelona Marathon.

In short, this is a team with the expertise to make giant drone racing a reality.

Our goal is to create the ‘Next Formula One’ and we believe that drone racing has all the ingredients to be just that.” – Dave Heavyside, Media and Communications Manager at Freedom Drone Sports 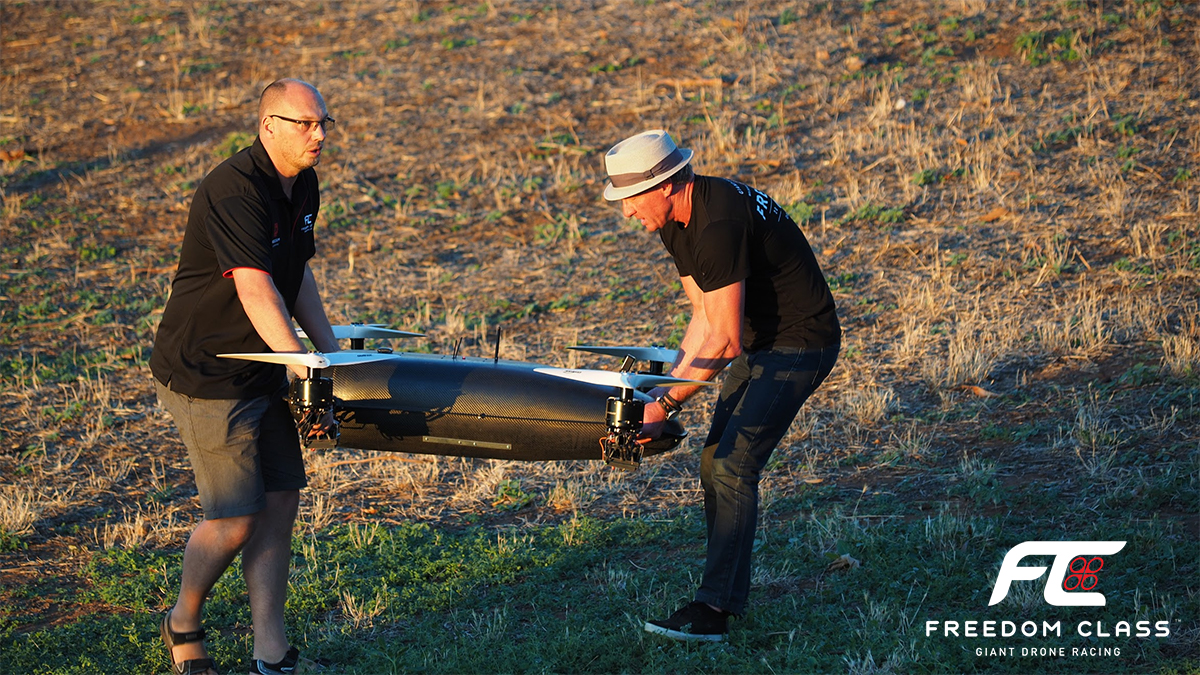 You could look at the huge TV and media deals rolling into various drone racing organizations and think that the only way is up, that this sport has taken off already. But really all of these big sponsorship and coverage deals are betting on potential. There’s no doubt that many of challenges facing drone racing are tricky to navigate. 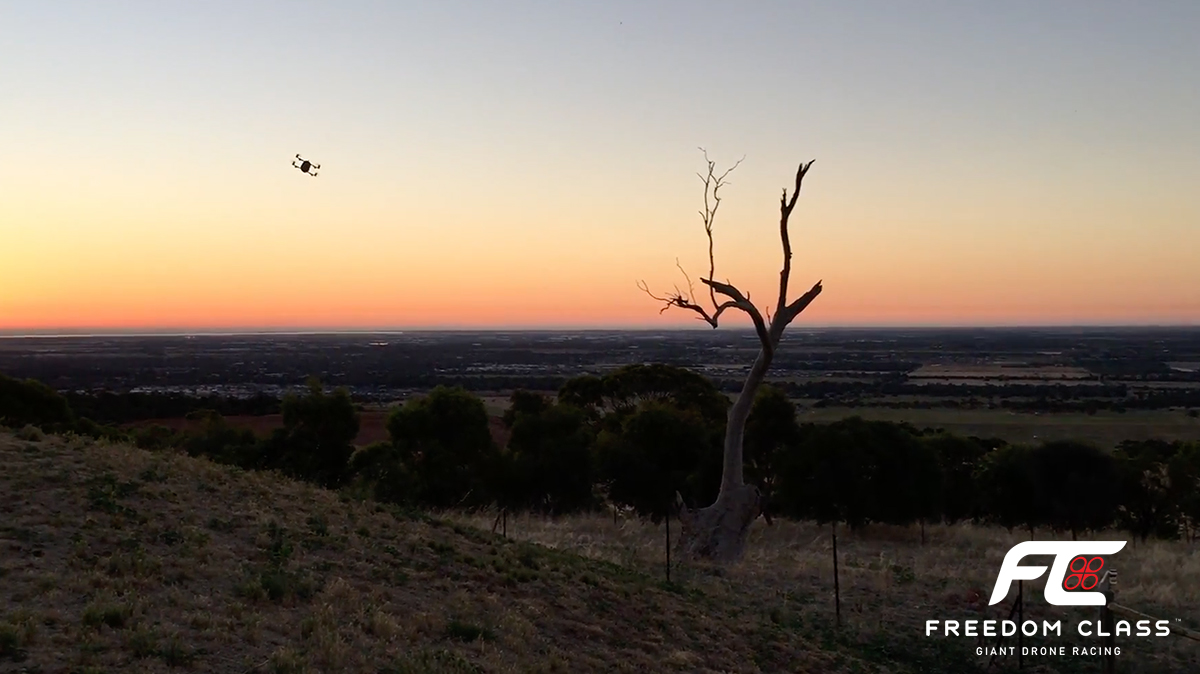 For starters, there remain question marks over whether this can ever be successful as a spectator sport. There’s absolutely no doubt that competitors have a great time while racing, and that live FPV streams give watchers a great view of the action. But there remains something missing, something that’s difficult to pin down. It doesn’t help that as long as regulations are tight because of safety concerns, watching drone racing through our screens and not in person will be the status quo.

The small size and distant nature of standard drone racing could hold it back from becoming truly mainstream. But there’s no doubt that increasing the size and speed of the vehicles competing has a positive correlation with excitement.

Freedom Class told FullDrone that plans are already underway for the company’s next giant racing drone, V2.0 (above). The brand new frame design has more of a focus on aerodynamics and performance, and the drivetrain will be the same as the original V1.0 with some small improvements.

So, the sky’s the limit? Just about. Our aim for V2.0 is to break the 200 kilometres per hour mark, and we have started sourcing funding to bring this awesome dream to its full potential.” – Paul New, managing director, Freedom Class

The real improvement says Heavyside, “will come in the custom designed and moulded frame”.

The final Freedom Class Racer will be based on the feedback given about the V.20 prototype, so there’s still plenty of work to be done. The team is also looking for funding for the next stages of development. If all goes to plan, we can expect an international launch event in late 2017.